The baseline evaluation provides a “snapshot” of societal awareness and perceptions about marine litter across Europe, and trends across a range of stakeholder groups. It examines individuals’ perceptions about the quantity, location, causes and consequences of marine litter, perceived risk and responsibility, and behavioural intentions to engage in solutions. A subsequent assessment of stakeholder perceptions will be conducted in year three, the final year of the project.

Questions the stakeholder survey set out to answer:

What are European attitudes and perceptions about marine litter?


Do perceptions vary across participating countries?

A total of 3748 respondents completed the survey across Europe and across a range of stakeholder groups.

Overall, the majority of respondents reported noticing litter on most or every visit to the coast. Respondents were concerned about marine litter and perceived the marine environment as being highly valuable to society. Litter was believed to be present in all locations of the marine environment, largely near urban areas and on beaches, and with the least in polar seas. Marine litter was also perceived to pose several negative impacts. Respondents believed that plastic represents 45.5% of marine litter – this signifies a large underestimate according to the literature.

Respondents believed government, industry, commercial users and general public are highly responsible but less competent and even less motivated to take action to reduce marine litter. This is in comparison to independent scientists and environmental groups who were perceived as least responsible, yet most competent and motivated. Respondents reported being likely to take several actions themselves to reduce marine litter and perceived that it would be reasonably easy to take these actions. 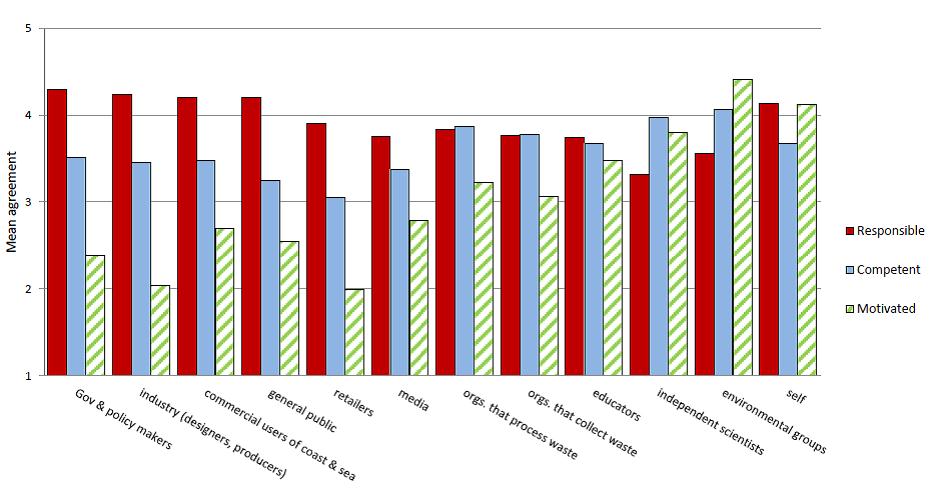 Perceptions regarding who is responsible, competent, and motivated (1-5 scale: strongly disagree – strongly agree) 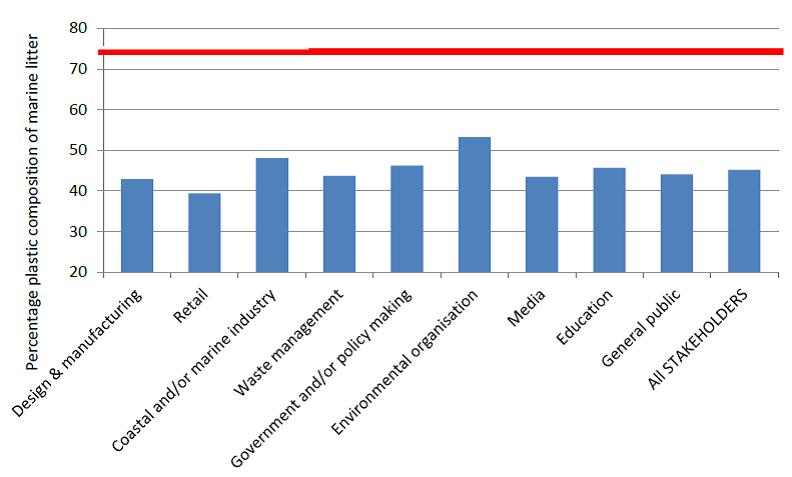 Perceptions about the percentage of marine litter that is composed of plastic by stakeholder group. The reference line at 75% indicates the ‘actual’ proportion of plastic that is commonly reported in the literature.

Similarly, all countries underestimated the percentage of marine litter that consists of plastic, particularly respondents from Cyprus, Denmark, Romania, Italy, Portugal and Turkey who reported the lowest percentage composition of plastic.